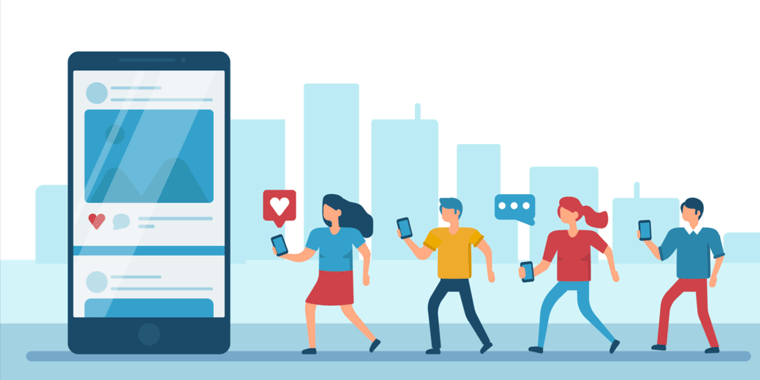 In the past, companies would create products to tell a story to customers. Raja Rajamannar, CMO of Mastercard, says, Storytelling is Dead. Jeff Bezos says that at Amazon, “We see our customers as invited guests to a party, and we are the hosts. It’s our job every day to make every important aspect of the customer experience a little bit better.” However you cut it, customers are now engaged participants rather than passive recipients. It’s the job of companies to engage with customers rather than just treat them as an audience.

It all starts with how movies and television have become media that we share rather than media that we consume. Ze Frank, a viral media guru who was the president of Buzzfeed Entertainment Group, has a great talk about media as a sharable experience. Ze says that we used to think about media being a great immersive experience of the highest quality. Now it’s about forming connections and being part of something larger than ourselves. You can see this in all the snippets and memes shared on Facebook which are of amazingly low quality.  Take a look at the recording of a great experience that Ze and the Buzzfeed team created when they hosted a Facebook Live session where they used rubber bands to explode a watermelon. Almost a million people tuned in to be part of the excitement of when it was going to break and what would happen at that moment. There’s something special about sitting as a group and waiting for something that’s very special and different from watching a recorded video.

Some large companies bring together their customers together into communities. Amazon famously does this with its ratings and reviews. Any customer of Amazon can rate a product. By bringing together these ratings all in one place, these ratings come together to form a community rating and review. It’s not about Amazon choosing the best products for you, it’s about other customers recommending the best of Amazon. When Amazon initially allowed customers to post reviews, publishers were aghast, telling Jeff Bezos, “We’re in the business of selling books!” But by leaving up negative reviews in addition to positive ones, Amazon is able to build a healthy and trustworthy community of its customers. This also allows Amazon to leverage these reviews in its 4-Star stores.

Companies know how to leverage the power of connection. Coca-Cola has a long history of connecting people. You can go back to campaigns like I’d Like to Buy the World a Coke and Always Coca-Cola. These are catchy, wonderful iconic commercials. But today, Coke is focusing on building personal connections. You can see this with their “Share a Coke with” campaign. It’s more than a personalization gimmick of putting lots of names on bottles. It’s about building a message not around “This is a Coke for You” but “This is Coke for you to Build a Shared Experience with Someone Else.”

Cards without Humanity does a great job of providing holiday experiences for hundreds of thousands of customers. The company makes an irreverent card game that’s best played by drunk college students. Instead of standard marketing during the holidays, they purposely break the marketing mold. Each year, on Black Friday, they increase the price of their game by $5. One year they asked for $5 and said they’d spend it however they wanted. After the money was collected, they gave it to the staff who posted what they bought online. Last year, there was a battle between Artificial Intelligence and the Cards Without Humanity human writers. If the humans sold more cards, they got a $5000 holiday bonus. If the Artificial Intelligence won, they would fire the writers. Spoiler alert: the humans won. This isn’t meant to appeal to every customer, but it aligns very well with Cards Without Humanity’s irreverent brand. These campaigns are enormously engaging to the tens of thousands of customers who paid to be part of it and the millions more that watched from the sidelines.

The purpose of storytelling is changing. People don’t want to be told a story but want to be part of a larger experience. Products no longer provide individual experiences but provide a way for people to connect and brands together to build something great. Midas Exchange and our corporate trade program enable clients to reduce their cash outlay on media, leveraging those savings to be invested in marketing experiences.